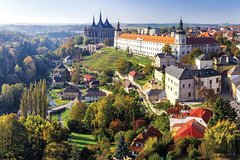 Private Kutna Hora and Detenice medieval show Full Day Trip. Step back in time to the town that began in 1142 with the settlement of the first Cistercian monastery in Bohemia. Immerse yourself in the history of the 1260 German miners who searched for silver in the mountain region. See a small Roman Catholic chapel in this area that is estimated to contain the skeletons of between 40,000 and 70,000 people. Learn about the artistically arranged bones to form decorations and furnishings for the chapel itself.
One step into the tavern and you are transported from the 21st century back to the Medieval Ages. Immediately feel the ancient energy radiating from the vaults and old stonewalls. Each sentence shouted out by the clamorous staff and tones of medieval songs will make you feel as they did in yesterday.

This website uses cookies to improve your experience while you navigate through the website. Out of these cookies, the cookies that are categorized as necessary are stored on your browser as they are essential for the working of basic functionalities of the website. We also use third-party cookies that help us analyze and understand how you use this website. These cookies will be stored in your browser only with your consent. You also have the option to opt-out of these cookies. But opting out of some of these cookies may have an effect on your browsing experience.
Necessary Siempre activado
Necessary cookies are absolutely essential for the website to function properly. This category only includes cookies that ensures basic functionalities and security features of the website. These cookies do not store any personal information.
Non-necessary
Any cookies that may not be particularly necessary for the website to function and is used specifically to collect user personal data via analytics, ads, other embedded contents are termed as non-necessary cookies. It is mandatory to procure user consent prior to running these cookies on your website.
GUARDAR Y ACEPTAR
Ir a la versión móvil